Why Wellness Essence (WE)?

Following many years' frustration as a result of witnessing the systematic management of disease rather than its complete resolution, Carolyn began to study and quickly became Immersed in various Energy and Consciousness-Based Healing Modalities. Being Experienced in, and Aware of, a Wide Range of Effective Natural Healing Methods; and, Gifted with the Analytical Ability to Discern the Ultimate Strengths, Weaknesses, Limitations, and Fatal Flaws of systems in general, she found herself on a DIVINELY INSPIRED MISSION to receive and develop an Innovative, State-of-the-Art, Consciousness-Based Healing System which would Embody and Integrate the most Essential Primary Aspects of Optimal Healing and Performance - Primary Aspects that would work together Harmoniously in order to render the Exact, ULTIMATE Energetic (Vibrational) Protocol for each Individual Client's Specific Needs!

Over the course of 16 months' time, from March 2016 to July 2017, more than 100 Divinely Inspired, Collective Wellness Essence (WE) Sessions were facilitated by Carolyn Marn. In addition, from 2017 - 2019, she configured 350+ "Automatic" Wellness Essence (WE) Healing Modules targeted to resolve specific conditions and/or to augment various empowering qualities. 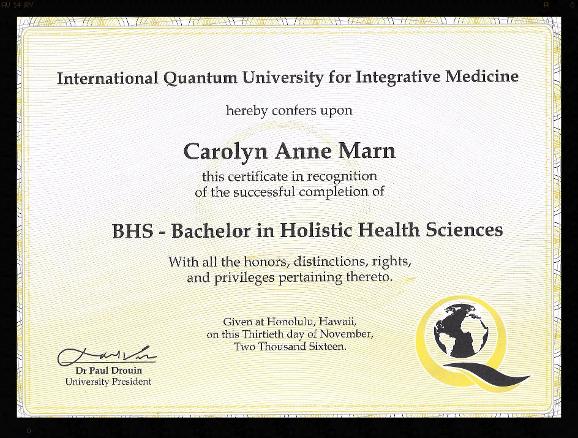